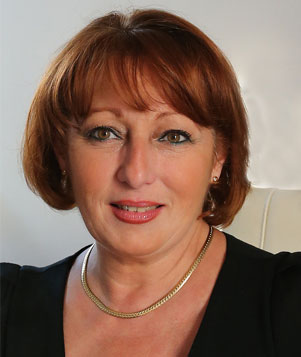 Contact us
Our Laywers
Publications and Lectures
Clerc bailiff at the beginning of his career and company lawyer for six years in large groups, Catherine Chabert has integrated in 1990, initially as a board, a Parisian law firm dedicated to IT law, then after 15 years, founded his own firm in 2005.

She practiced IT law, first of all, on user side (within a bailiff computerized study ) and in a second time on manufacturer side (in a large American group).

After this experience, she became head of the Lyon antenna of a large Parisian law firm specializing in IT law and built a department dedicated to computer and biotechnologies law.

In 2005 she created the Chabert & Associés law firm, and puts its experience to the benefit of its customers, SMEs and large companies, for which she provides consulting (60% approx) and litigation assistance (40% approx.).

She has taught courses in several universities (Lyon I, II, IAE) or schools (EM LYON, IGS, School for attorneys) both in computer law, in biotechnology law, regularly make conferences and trainings and publishes articles in the press and on the social networks.

She is the author of a book entitled "Biotechnology, Biomedical Ethics and Law", published by HERMES editions in 1995 after the passing of the first bioethics law and has contributed to several books on computer issues.

She spends part of her time to community activities in the field of IT. She was President and Vice-President of the Association for the Defense of Children on the Internet and networks (ADEIR), which the goal was the fight against pedophile networks. She is a member of the International Association of Lawyers (UIA).
She is a member of Rotary international - Club Lyon Croix Rousse - District 1710.

IMPORTANT COOKIES INFORMATION
We use technical cookies to ensure the proper functioning of the site, we also use cookies subject to your consent to collect statistics visit.
Click below on & laquo; ACCEPT & raquo; to accept the deposit of all cookies or on & laquo; CONFIGURE & raquo; to choose which cookies require your consent will be registered (statistical cookies), before continuing your visit to the site. Show more